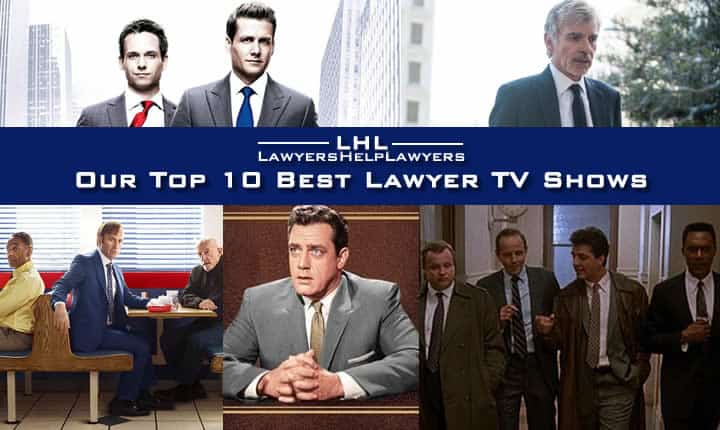 When it comes to television, the legal profession has provided a great amount of engrossing series that have captured audiences across several decades. And it fits, not many things can be more dramatic than a highly contested court room battle. As a company forged in the legal industry, we certainly are guilty of binge watching a lot of legal TV shows. As such, we created this list to highlight the best legal TV series worth your time.

A common favorite of grandparents everywhere. Matlock debuted in 1986 and enjoyed a nice lengthily run until its finale in 1992. This legal drama starred Andy Griffith as a sharp criminal defense lawyer named Ben Matlock fighting the cause for justice. Many of the signature scenes included Matlock dramatically confronting witnesses on the stand. The formula worked as Matlock enjoyed strongly consistent ratings through its series run. Some critics wrote off the series as being derivative of the format and plot sequences of another legal TV drama, Perry Mason. Despite any critiques, and perhaps a poorly written Non-Compete Agreement with one of Perry Mason’s writers, Matlock episodes can still be found on some stations in syndication. Don’t be be like a character on this classic tv show. Get your legal documents in place like a solid LLC Operating Agreement that, even if your partner killed you, would hold up in court!

Here is another one-season standout that hit the TV’s and tablets this past year. Amazon Studios certainly didn’t hold back any punches with their first produced legal drama for their streaming service. Starring veteran actor Billy Bob Thornton as a much disenfranchised lawyer, Billy McBride, this drama centers on his battle with alcoholism after he was flushed out of the successful corporate firm that he founded. Definitely NOT someone you want to have on your childcare authorization form and able to pick your kids up from school.

The first season’s plot centered around McBride’s holistic crusade against a company defended by his former firm, all done through practicing out of a motel/hotel. Boasting strong viewership, this streaming drama was renewed for a second season in February of 2017. Look for more Billy Bob doing his billy-lawyering in 2018.

Fun Fact: Co-Star William Hurt had to undergo 3 hours of makeup prior to getting in front of the camera in order to make his mysterious burnt face appear realistic.

Need a laugh? Need some John Lithgow to brighten your legal mind? Then Trial & Error is a great bet. This NBC episodic comedy debuted in 2017 to strong reception by fans and critics. The show takes a well-aimed, sarcastic shot at the growing genre of reality-law species, i.e. Netflix’s immensely popular Making A Murderer. In this scope, Trial & Error does a darn good job at keeping the laughs rolling as a young and ambitious New York defense attorney, Josh (greatly played by Nicholas D’Agosto), who is paged to a southern and somewhat backwards town to defend the murder charge of Larry Henderson (played by John Lithgow). Armed with an incredibly inept and hilarious support staff, it is basically Josh and Larry vs. the entire town as every step of their trial process happens to find more and more damning evidence against the defense. Recently renewed for a second season by NBC, we hope that this mockumentary keeps the legal laughs coming for years.

Fun Fact: John Lithgow playing a character by the name of Larry Henderson is by in itself comical considering he played the lead role of George Henderson in the 1987 comedy Harry and the Henderson’s. One can’t help but wonder if the closeness in names was a coincidence or a quirky kink thrown in by the creators of the show.

Originally based off a 2008 British TV series, this 8-part HBO crime drama riveted audiences and critics alike. It proved to be a fascinating introspective piece about the American legal system. This intriguing drama was well bolstered by a fabulous performance by John Turturro who played a sympathetic criminal defense lawyer who sort of had this curious case fall in his lap. The series proved to be a breakout showcase for Riz Ahmed, who played the wrongly (or rightly???) accused defender. Since the show’s eight episode run, Ahmed has seen his star blossom into other leading and supporting roles of multiple full-feature films.

Fun Fact: While initially slated for only a one-season run, there have been rumors that a second season could be a possibility. According to reports, the cast and production team are open to it but are in no hurry to rush anything that won’t follow up the first installment with the high quality that the first season brought us.

Debuting in 2011, this USA Network series won the hearts and minds of audiences from the get go. The show revolves around a college dropout, Mike Ross (played by Patrick J. Abrams) who essentially scams his way into becoming a lawyer at a prestigious New York City law firm. Mentoring Ross is the well-schooled and polished Harvey Specter, well played by Gabriel Match who also serves as a producer of the series. Together Mike and Harvey weave their way through various intense legal standoffs, many of which taking place in fictional portrayals of corporate America on topics like shady business management agreements. All the while trying to keep the secret of Mike’s non-lawyer status a secret. With a solid supporting cast including standouts such as Rick Hoffman, Gina Torres and Meghan Markle, this basic cable series has spanned 6 season with a 7th season set to debut in July of this year – Certainly worth a weekend of legal TV binge watching.

This Los Angeles based legal drama was a hit amongst audiences and critics alike. Spanning 8 seasons and delivering 171 episodes, this series is one of the longest lasting in our list of the best legal TV series of all time. First airing in 1986, this Steven Bochco created series utilized an ensemble cast that found themselves in engrossed in parallel story lines, social drama and the occasional off-the-cuff humor. LA Law grew a strong following by featuring stories that were popular hot topics at the time, including issues such as abortion, racism, LGBT rights and domestic violence. The series came to a conclusion in 1994, exiting with 15 Emmy Awards to its credit.

When you can turn something like the legal industry into a straight up comedy, you know you have something special. NBC knew that when Night Court first aired in 1984. Featuring a well-received ensemble cast highlighted by Harry Anderson and John Larroquette, this sitcom had its audience in stitches. Riding an evolving wave of dry comedy, the show largely assembled around the staff of a shoddy New York City courthouse who are forced to deal with a parade of neurotic and wildly insane group of accused criminals. Of all the shows on our list, Night Court had the highest propensity to evolve over its series run. Later episodes had the characters involved in more slapstick style of humor as opposed to the dry-wit comedy of earlier seasons. Despite the chameleon type of series evolution, fans remained loyal and locked into their TV’s.

Fun Fact: Despite ending its series run over 2 decades ago, Night Court still enjoys syndication on spot cable networks in the U.S. as well as syndication in Canada and Australia.

As Casey Kasem used to say, “to the top 3 with a rocket” this AMC dramedy is truly a treasure for the ages. Nobody should be surprised considering this Breaking Bad prequel came from the same creative team which saw the original enjoy numerous EMMY nominations and awards. The standouts in this show are Bob Odenkirk (who plays the title character, James McGill/Saul Goodman) and Jonathan Banks who plays the ever stout Mike Ehrmantrout. The brilliance of this legal show is the way in which the writers seamlessly wield splats of comedy into the very suspenseful plot undertones. Some attest this series success to the die-hard fan base that Breaking Bad left in its wake. However, almost 3 seasons in, it is clear that this show is more than capable of standing on its own legs.

Fun Fact: This show can’t stop accumulating critical acclaim. The first three seasons boast a 97%, 97% and 98% rating on Rotten Tomatoes, respectively. All the while garnering up 19 industry award nominations, winning 10 of them.

Arguably the foremost legal drama of all time, this series originated at CBS in 1957 and enjoyed a very well-received run through 1966. This intense drama starred Raymond Burr as a bloodhound of a criminal defense attorney. The show grew a quick and loyal following largely based off of the highly dramatic scenes of Perry Mason cross-examining many suspicious witnesses on the stand. As a testament to the original show’s popularity, Perry Mason saw two spin-offs that made their way to the small screen. Furthermore, published reports point to a 2017 remake by HBO starring no other than Robert Downey Jr. in the lead role of Perry Mason.

Fun Fact: In one of its two spin-offs, the Perry Mason (television movies) which were largely filmed in Denver, Colorado due to lowered production costs saw our own C.O.O, Paul Gaudet, featured in a guest role in episode 11 entitled “The Case of the Musical Murder”. (See the clips below)

The staple of all legal dramas. No other legal TV show lasted longer nor created a more influential footmark. Lasting 20 years, this Dick Wolf creation not only helped pave the way for multiple spin-offs (Law & Order SVU, Law & Order Criminal Intent, Law & Order Las Angeles) but it also helped soften up the 90’s TV viewership to accepting legal drama as a prime form of episodic entertainment. This Stallworth of a legal series was formulated around a two part premise: the police and legal procedural portions of the justice system. Many of the plots were “based on real life cases” but greatly dramatized for TV purposes. With such a lengthily series run combined with episodes that featured many quick-cut scenes, countless actors and actresses were featured as in guest roles. In fact, the age-old game of “6 Degrees of Kevin Bacon”, where you have to find a string of connections from Kevin Bacon through various TV and movie exploits has lately been replaced by “6 Degrees of Law and Order”.

END_OF_DOCUMENT_TOKEN_TO_BE_REPLACED

Whether you refer to them as courtroom dramas or law movies, film centering around crime and justice have been challenging audiences for about as long as movies have existed. Since…