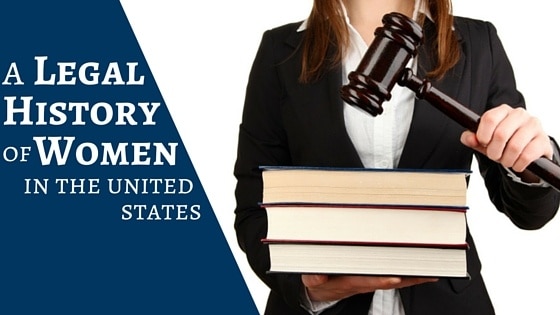 March is National Women’s History Month so naturally, it’s time to celebrate women in the legal profession! As we were writing we realized that we cannot do this without also taking a candid look at women’s history with the legal system itself. After all, women only received the right to vote less than 100 years ago!
Despite the hurdles, women have continued to make strides in the legal profession. Let’s take a look:

The 17th and 18th Centuries

Given the number of positions women were previously barred from, female lawyers have actually been around a long time! The first female lawyer, Margaret Brent, arrived in colonial Maryland in 1638 and was involved in over 100 cases; she even owned land and served as the executor of Governor Calvert’s will. In the 1740s, court clerk Susanna Wright prepared wills, deeds, indentures and other contracts.

In these days, some women were able to vote in some areas. It’s a little-known fact that it wasn’t until the American Revolution and the creation of state government that all women were disenfranchised by 1807.

The first professional organization for female lawyers, the Equity Club, was founded in 1887 by Letitia Burlingame. Central Tennessee College of Law hired what was believed to be the first female law instructor in the world, African-American attorney Lutie A. Lytle, in 1898. A year later, Ellen Spencer Mussy and Emma Gillett founded the Washington College of Law for female students; Mussy and Gillett would later found the Women’s Bar Association of D.C.

And all of this occurred before women were even allowed to vote! There was still a long way to go, however, after the 19th Amendment was approved.

Thirty years later, the 1960s brought about the Equal Pay Act and achievements to women of color. Japanese-American Patsy Takemoto Mink became the first non-white woman in Congress in 1965, where she led the charge for Title IX. Shirley Chisholm followed her footsteps in 1968 to become the first black woman elected to Congress. Both women ran for President.

Issues unique to women’s reproduction were also brought forward in the 20th century with Margaret Sanger opening the first birth control clinic in 1916, a year after being indicted for “distributing obscene material” on the subject. It would be another 56 years before the Supreme Court would end contraception bans in Eisenstadt v. Baird. A year later, Roe v. Wade declared abortion to be constitutional and in 1978 the Pregnancy Discrimination Act became federal law.

It’s interesting to note that women received the controversial right to abortion before receiving the right to serve on juries. States’ right to bar women from jury duty was upheld by the Supreme Court until Taylor v. Louisiana in 1975.

A short time later in 1981, Sandra Day O’Connor became the first woman to be appointed to the U.S. Supreme Court. The 1990s saw the first female U.S. Attorney General with the appointment of Janet Reno and the first female President of the American Bar Association (ABA), Roberta Cooper Ramo. Yet the law was still catching up: it wasn’t until 1993 that marital rape was made illegal in all 50 states (it was legal in all states until 1975).

The 21st Century and Beyond

Legal battles over women’s issues continue, and women are still underrepresented in the industry itself: half of all law degrees are awarded to women yet they are only 33% of judges and lawyers. While they hold 45% of associate positions in private practice, the percentage goes down as one moves up: only 20% of partnerships are held by women and when it comes to the equity partner level, only 17%. The ABA also reports that female lawyers continue to be paid less than their male counterparts.

All this being said, there is no doubt that women will continue to prosper on both sides of the courtroom. They have already overcome great odds; their long and complicated history with the legal system is only a testament to their perseverance.