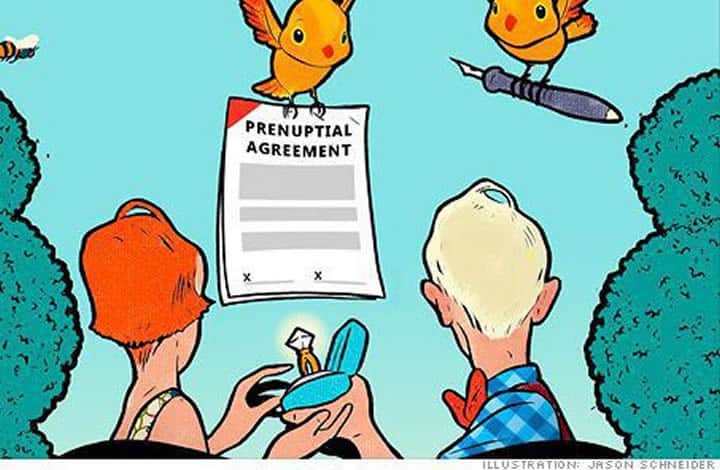 “Get a prenup” is an unfortunate common saying among newlywed couples in an age where divorce percentages have only just settled from stellar heights, but what about a deal between those who intend to stay together… Does such a contract exist? One that could help with divorce rates and cause people to work out their relationship? If one party comes to the marriage with a list of assets and wealth while the other party has nothing, does a contract help fill a comfort level that the marriage is made from love not for the money. For the party that brings no asset to the marriage do they feel like the other party does not trust them or that the other party is looking forward to a divorce before they even say their vows?

How about the cases when the parties are already married and one of the party wants a contract to secure their marriage or want to protect their assets after marriage. In these cases, they would have a postnuptial agreement, a legal contract that would be written between these spouses that are usually written after certain events occurred in the marriage (i.e. infidelity) and they would still intend to stay together; or a postnup could reiterate what would happen if their marriage ends. If one of the parties decide they still wants a divorce they could ask for the house, the car, and a generous slice of the other assets, however a postnuptial can protect one party or even both party from divorce and grab scenario. This variant of the prenuptial agreements is increasing in its popularity and is similar to its cousin contract, a prenup…

…but takes place after the marriage and for this reason controversy arises.  “They’re treated differently because they have a different history. For thousands of years marrying couples— or, usually, their families— made deals before weddings, exchanging property and settling other rights and obligations. Those ancient premarital agreements addressed life after death, not divorce,”

If done right, both legal contracts are recognized by most states as valid, and hardly ever get thrown out of court cases. A postnuptial should not be considered a solution to divorce, but it can aid a troubled marriage that wants to work it out legally. For a sample, prenuptial marital agreements check out the link here: http://family-law.lawyers.com/divorce/will-a-postnuptial-contract-really-protect-you.html

Most of us are accustomed to public contact with friends and family, however, we are currently confined with severe limitations due to a global pandemic threatening our health and livelihood. …

END_OF_DOCUMENT_TOKEN_TO_BE_REPLACED

Asset freezing is a legal process which prevents a defendant, whether innocent or guilty, from dissipating their assets. Although asset freezing has a persuasive effect on settlement negotiations, the freezing…

END_OF_DOCUMENT_TOKEN_TO_BE_REPLACED

January has unofficially been dubbed Divorce Month and many legal experts believe that the reason for this trend boils down to one idea: the holidays.  Reason People don’t want to…