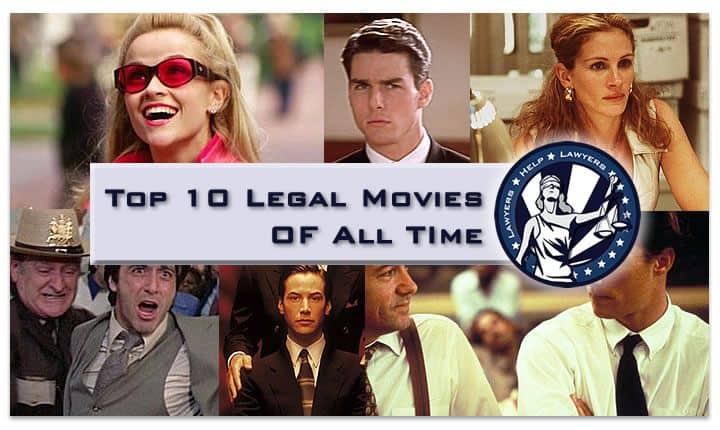 Everyone enjoys a good flick. For those of us in the legal profession, a movie about the law is especially enticing. We compiled a list of the top ten legal movies of all time. Time to crank up the old DVR and/or Netflix account and nerd-out to some legal beagle flicks.

Neo (Keanu Reeves) went deep into the dark side in this film with the help of the Dark Lord himself, played by Al Pacino. This 1997 drama was based on the Andrew Neirderman’s novel of the same name. Buoyed by a strong supporting cast (Charlize Theron, Craig T. Nelson, Jeffrey Jones, etc.) the film depicts the sinister recruitment of a hot-shot young lawyer in order to serve Satan incarnate. The film proved to be a fiscal blockbuster, raking in an impressive box office figure of $152,944,660 with a relatively small budget of $57,000,000. If you need a reason to see Neo mix and mangle with the dark side via a partnership of a law firm, this is your jam.

John Grisham might as well change his Linked-In profile to “Professional Legal Fiction Writer” as yet another of his novels made its way onto the big screen in the form of this 1996 film. Boasting a wildly talented cast including such silver screen strongholds as Matthew McConaughey, Sandra Bullock, Samuel Jackson, Kevin Spacey and Donald Sutherland, this flick was a winner from the start. The film takes us to the racially segregated world of Mississippi where a man (Samuel Jackson) was charged with the murder of two men who raped his young daughter. McConaughey plays the resolute lawyer who teams up with a young law student (Bullock) in order to free the accused. Well set in the racially divisive world, the film does a great job of combining a strong sense of suspense along the annals of the nature of dramatized, trial law antics.

Author John Grisham has a strong propensity for writing compelling stories within the legal narrative. This book to screen adaptation featured strong performances from Susan Sarandon and Tommy Lee Jones. Directed by Joel Schumacher, the film received positive reviews from critics and fans alike. Sarandon received a BAFTA Award for Best Actress in a Leading Role for her work in the film. The film would also prove to be a springboard for Mary Louise Parker, who over a decade later went on to head the successful series, Weeds. Warner Brothers, the studio who released the film, were very happy with the $117,615,211 box office bounty the film brought in, which was quite the haul considering the film had a small budget of only $45,000,000.

Reese Witherspoon aptly portrayed a rather ditzy law school student who was determined to prove that she belonged in the realm of the academic elite. Despite being slightly cheekish and largely formulaic, the film manages to round out rather well, spearheaded by a strong performance from Witherspoon. A favorite among women in the legal industry, this campy film is certainly worth a viewing.

John Grisham again flexed his legal writing muscles in this 1993 cinematic adaptation of his book of the same name. It marks just the first appearance of Tom Cruise in this list of the best legal movies, as he received wide-spread acclaim for his portrayal of the story’s main character, Mitch McDeere. The story revolves around the premise of a young, hot-shot, lawyer who lands a big time gig for a powerful Memphis law firm that ended up being heavily involved in representing some reprehensible members of the Chicago mafia. Costarring Jeanne Tripplehorn and Gene Hackman, the movie proved to be a huge hit at the box office, netting upwards of $270,000,000 off a budget of just $42 million.

5. And Justice For All

Julia Roberts steals the show in this docudrama based on the true story of Brockovich’s legal crusade against the energy corporation Pacific Gas and Electric. The true-to-life story features a defiant legal assistant and environmental activist fighting an uphill battle against a conglomerate who was guilty of poisoning the lives and bodies of the citizens in the surrounding area. This 2000 film received box office success as well as widespread critical praise. It was nominated for a string of Academy awards including Best Picture and Best Director (Steven Soderbergh). But Julia Roberts came away with the most accolades, receiving Best Actress awards from the 73rd Academy Awards, BAFTA, Golden Globe, and Screen Actors Guild.

Tony Gilroy both wrote and directed this remarkable drama that was centered on an attorney caught in the swirl of controversy and personal discovery following the mental breakdown of his colleague. Manning the helm was George Clooney who shined in this 2007 film. The supporting cast was a bit underwhelming but Clooney’s performance carried the film throughout. Riding the back of the stellar Clooney, the film received strong critical praise to the extent that Roger Ebert gave the film a 4/4 review (quite rare for Ebert), while Richard Roeper called it the “movie of the year”. Despite garnering such hefty critical acclaim, the film fell somewhat under the radar, bringing in just $92.9 million dollars in box-office + rental/DVD revenue.

What’s better than a good legal movie? A legal movie that makes you laugh. And clocking in on our list at #2 is the best legal-based comedy of all time. Possibly one of the most defining roles of his illustrious career, Joe Pesci plays a slick talking and loose dressing New York lawyer tasked with defending his wrongfully accused cousin and his friend. Accompanying Pesci was the dominant performance of Marissa Tomei, who played Pesci’s fiancée as they wormed they way through the foreign turf of Southern Alabama. Tomei’s performance earned her an Academy Award for Best Supporting Actress. While many people were surprised by her award winning performance, once you watch the film, it is very clear that Tomei’s performance truly lifted the film to legendary status. Two Utes? I’m sorry, two youuuuthh’s.

Can you handle the truth? No seriously, ask yourself, can you handle the truth? If you answered yes, the indomitable Jack Nicholson would beg to differ. A Few Good Men manifested some of the most iconic scenes in movie history. The pinnacle of which featured two acting legends (Tom Cruise and Jack Nicholson) facing off in the climax of this riveting film (a scene in which Nicholson was able to do in one solitary take, according to film lore). Originally written for the stage, this epic graduated from playhouses to the big screen with strength.

-To Kill A Mockingbird
-Philadelphia
-The Whole Truth

Did we miss one? Or do you beg to differ, comment below to give us your take.